Copy of the Article in Winter Haven News Chief:

Willows in the woods

Master's project will provide Bok Sanctuary with a couple of huts

LAKE WALES - She might not be using her architectural degree to build a skyscraper, but Anne Rosenvald Moore is building something that will provide hours of entertainment for children. 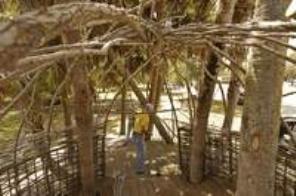 Anne Rosenvald, left, and Al Holeton work on tying together willow branches on the recreation equipment at Historic Bok Sanctuary. 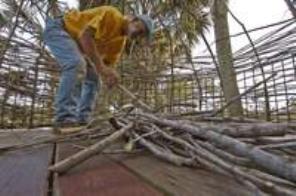 Al Holeton, a volunteer, bends to pick up one of the willow branches being used to construct a hut on the recreation area at Historic Bok Sanctuary in Lake Wales

Moore is building two willow huts at Historic Bok Sanctuary. She's pursuing her master's degree in interdisciplinary art from Goddard College in Vermont and for her third-semester practicum, she has to complete a community project.

When looking for a project, she came across Historic Bok Sanctuary, where new willow huts were needed in the recreation area.

David Price, president of the sanctuary, said the first willow huts were completed in 2003. In 2000, a Lakeland woman donated money for a children's garden. At that time, Price said, the attraction's staff put together ideas for children's activities throughout the gardens.

"A willow hut was one of those ideas," Price said.

A willow hut is a dome or cone-shaped structure made from willow tree twigs. The twigs are weaved like a basket into shapes and secured with wire. The size of a hut is meant to accommodate children.

"That idea was not fully fleshed out, but we built the platforms," Price said.

About that time, Price said, he met with a man from Canada who made willow furniture. He built one dome willow hut but ran out of time with the second one.

"One of the gardeners took a fancy with that and got together with other gardeners," Price said.

The gardeners completed the second dome in a different style that featured a window and bromeliads growing out of the top of it. The huts were completed in 2003 and made it through the hurricanes of 2004. However, in 2006, there were problems with rot in the wood and they had to be taken down, Price said.

"We were looking to build a new willow hut, but a lot of the willow we were getting was now underwater and dead," Price said. "We found a new source for willow and more importantly, we found a person to build them in Anne."

Moore will create two huts for the Sanctuary, one dome-shaped and one cone-shaped. She and volunteers started March 24 and will be working through the week to complete the project.

"This is a public community project," Moore said. "I've been looking into grants, but I'm also looking for someone who's interested in sponsoring the project."

She moved to Florida in 1996 where she continued to develop her artistic skills through painting and drawing.

The Lakeland newspaper, The Ledger, rewarded the Willow Hut Project with Garland in the column “Gigs and Garlands” on April 13, 2008:

Garland: To Anne Rosenvald Moore, for building two willow huts for the children’s garden at Historic Bok Tower as part of her master’s degree in Interdisciplinary Arts from Goddard College in Vermont.